In the great Treatise there is mention of forward and backward moving numbers. Ini­tially this seemed to relate to planets moving direct and retrograde, however there is another consideration that is likely. It is one that confirms the sequence of the hexagrams.

When viewing the correct sequential numbers of the hexagrams, this is a confirmation about the sequence. (This is not referring to the commonly accepted numbering in pairs of opposites as arranged by the Duke of Chou or King Wan which has no cyclical validity.) 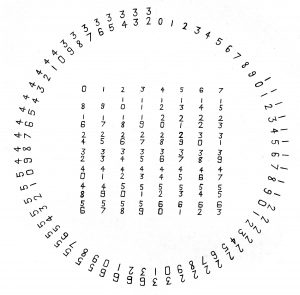 In this interpretation, the degrees of the zodiac move from the bottom of the hexagram to the top, for 45 degrees, through the cardinal and first half of the fixed signs. From the middle of the fixed signs, for 45 degrees, to the end of the mutable signs, the degrees move from the top of the hexagram to the bottom. This could also be considered as backward and forward moving numbers.