At the top of the page is the traditional Wilhelm hexagram number and name. This is base on the Arrangement of Later Heaven. 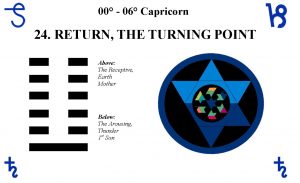 On the left-hand side, under the hexagram name, you will see the traditional to­tem shaped illustration of the hexagram. Beside the hexagram totem, the main associations of the upper and lower trigrams are written out.

On the right-hand side, beside the hexagram is a circular representation of the hexa­gram. They look like stars in a circle. In this drawing there are arcs of firmness or strength for yang or solid lines. There are points of sensitivity for yin or broken lines.

Note: It should be briefly mentioned here that each of the hexagram star shapes also have a dis­tinct position on the tree of life in Kabbalah.

At the four corners around the hexagram name, totem and star drawing are four symbols. At the bottom left and right-hand corners are the symbols for the planet that rules the zodiac sign which contains the hexagram.

At the top right-hand corner is the traditional symbol for the sign of the zodiac.

At the top left-hand corner is another symbol for the zodiac sign.

Note: At the beginning of my research a new set of zodiac symbols were designed to distin­guish between the sidereal (constellations) zodiac and the tropical (seasonal) zodiac. The I Ching correspondences are made to the tropical zodiac which measures the season and the changing ratio of day to night throughout the year. The tropical zodiac, like the seasons, should be reversed for the southern hemisphere.

These new symbols incorporate a wave motion and have developed out of the symbol of yin and yang. Most astrologers use the traditional symbols on the top right-hand side. These new ones are included because they have been used in many of the charts and in much of the research. To me they stand for the tropical zodiac which includes the I Ching associations. In some of the articles about this correspon­dence of the I Ching to astrology, the system has been referred to as Astro-logic.

There is an alternative number for the hexagram based on Arrangement of Earlier Heaven.

There is also an alternative name, aligned with the sequence of Earlier Heaven. These names are a work in progress. They are meant to represent sequential relevance as distinct from the opposing relevance and accentuation of the Later Word arrangement.

This section deals with the correct correspondences of each hexagram to the corresponding cy­cles of nature. The sequence of the hexagrams has become one of the most corrupted areas of I Ching correspondences. This section is included to set the record right, which will in turn im­prove the quality and results of future research.

……Zodiac: Here we see the segment of the zodiac that the hexagram occupies.

……Calendar: The corresponding days of the year that the hexagram corresponds to is given for both the northern hemisphere and the southern hemisphere. They are different because the sea­sons are reversed. The zodiac positions are exact but the corresponding days of the year are ap­proximate because of the leap year factor. The starting and ending points are not at the same time every day and they are different for different places around the earth.

……The House Position: This refers to the corresponding astrological house. The beginning and ending of the astrological houses change as the latitude changes. The fixed points of the Mid-heaven/IC axis are used as references because they do not fluctuate due to latitude.

……The Time of Day: This is a derivative of the exact house position of the sun. The sun is on the IC, or lowest point beneath us in the heavens at true midnight, local mean time. Because of time standards, midnight is rarely at 12:00 pm clock time. The time is given in local mean time or sun dial time.

……The Aspect: Aspects measure the cyclic interrelationships of the sun, the moon and the planets. They move from being exactly together (0°) at the conjunction or new moon, to 180° apart at the opposition or full moon. This is called the waxing phase. They then return back to the 0° point at the next conjunction. This is called the waning phase. What is given here is the angular phase of the aspect relationship that corresponds to the hexagram.

……Moon Phase: There are eight moon phases and here is shown which moon phase the hexagram is in.

Here the interpretation is based on the two primary trigrams and on the two nuclear trigrams within. Special consideration is given to the appropriate time of the year. Here we begin to dis­cover the implications of the proper sequence of the hexagrams. Everything is considered in its proper season.

The two primary trigrams and the two nuclear trigrams within are assessed with an eye to both social responsibility and personal vulnerability. Here we see how the trigram relationships af­fect our subjective depths and the demands of our social position. Everyone has a relationship to their own health and hygiene, to their own home and family, to their sense of personal secu­rity, and to the manner they express or project themselves out into the world. We also have a social position and various other positions that affect our relationship to others, through respon­sibilities, integrity, consideration of others, group endeavours of work and play, marriage, in-laws, etc.

Here some conclusions are presented about the implications and changes going on. The judg­ments pertain to the essential considerations and vulnerabilities in the hexagram. They try to point out a way of resolving them without blame. ‘Without blame’ remains one of the main considerations.

Here the family relationship, as determined by the trigrams, is considered and elaborated on. How each family member affects every other member is described. The primary focus is on the lower trigram and how it relates to the upper trigram.

Each sign of the zodiac occupies thirty degrees of the circle. Each hexagram occupies six de­grees of the circle. There are five hexagrams in each zodiac sign (5 x 6°). There are six lines in each hexagram. So five hexagrams will have a total of 30 lines. These thirty lines correspond to the thirty degrees of a zodiac sign. One line of a hexagram occupies one degree of the zodiac, that is, a line for each degree.

Within the zodiac is a subsystem or zodiac cycle that repeats itself every sixty degrees or six times around the wheel. It is called the Pentan system.

The masculine signs of Aries, Gemini, Leo, Libra, Sagittarius, and Aquarius; correspond to the daylight is greater half of the year (spring and summer). The feminine signs of Taurus, Cancer, Virgo, Scorpio, Capricorn, and Pisces correspond to the darkness is greater half of the year (fall and winter). In this way the Zodiac is repeated six times within itself, six signs within a sign.

This gives to any degree of the zodiac (or line of a hexagram) a main zodiac sign and a secon­dary zodiac sign within it as an inner theme or pentan.

This sub-system of pentans contains its own sub-sub-system in which the zodiac repeats itself thirty-six times around the wheel. In this sub-sub-system there will be a zodiac sign for every fifty seconds of a degree. This comes into play in the line section.

In this section there is a consideration of the hexagram in relationship to the main zodiac sign and to the pentans involved. The diagram on the left-hand side shows the hexagram. On the top one sees the section of the zodiac and the sign the hexagram is in. Beside each line the corre­sponding pentan is shown.